Temple of the Abyss 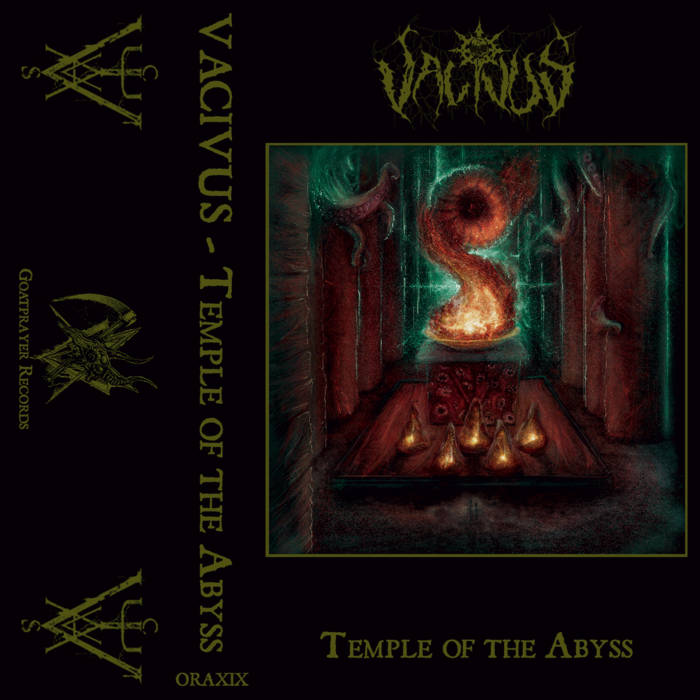 VACIVUS are one of the UK’s most promising new death metal bands who have been making impressions within the UK death metal scene for the last few years during a cycle of two recent EPs, “Rite Of Ascension” and the recently released “Nuclear Chaos” 7” respectively, and being pretty consistent on the live front as well. VACIVUS play a familiar style of dark brutal death metal that takes influence from classic old school U.S. death metal while finding its place within today’s death metal echelon fitting in amongst such bands as Dead Congregation, Blood Incantation, Grave Miasma, Cruciamentum, Phrenelith etc.

Their new full-length album “Temple Of The Abyss” shows immense musical growth in such a short time since the band’s initial inception in 2013. Musically “Temple Of The Abyss” (recorded and mixed at Priory Studios by Greg Chandler of Esoteric) captures all the essential elements inherent; the unrelenting brutality, dark brooding atmosphere, the infectious riffs and guitar shredding that lays down the backbone to a solid rhythm section making “Temple Of The Abyss” a death metal wonder to behold.

Bandcamp Daily  your guide to the world of Bandcamp